Posted on Sunday, July 13, 2008 by sfcollagecollective

“Master collage artist Winston Smith snips glorious and terrible tree flesh from the magazines of our mind and pastes it. A mind is a terrible thing to paste. And Glorious!”–Wavy Gravy

Winston Smith studied art in Italy, and has been creating collage and montage art in the San Francisco Bay Area since the 1970’s. His modus operandi since then has been to kidnap “innocent” images from the pages of vintage magazines and then to diabolically glue them into compromising or politically revealing positions in his surreal collage landscapes. Smith is credited with crafting a lasting album cover aesthetic — montage art blisteringly critical of the establishment

Smith’s name is a reference to the character of the same name in George Orwell’s novel “1984”– a clerk at the Ministry of Truth that re-wrote history books to appear in line with the current Government’s portrayal of historical events. Winston’s art fight backs at oppressing forces on our lives (be it the US Government, religion, or the super greed corporations). By carefully juxtaposing the classic 50’s “happy family” illustrations with those of war horror and death, the true irony from “acting like everything’s OK” when in fact it is not, surfaces.

Winston refers to his works of art as “montage” a specific type of collage. The distinguishing factor from collage and montage, he says, is that in montage one assembles a landscape where figurative elements are used next to each other to resemble some sort of “reality”, and in collage the aesthetic is much more formal–composition, color contrast, shapes, and textures.

Through his creation of flyers for punk shows that never existed, dozens of album covers, illustrations for magazines and magazine covers, and gallery exhibitions, Winston’s infectious work has been seen and felt throughout the world. 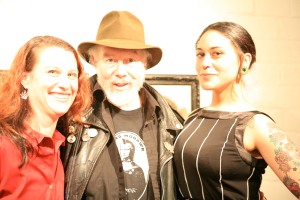 Winston’s wife Chick, Winston himself, and Nix Turner at the opening of Nicomi Nix Turner’s ‘In Vein’ show at Gallery Extrana, Friday July 14, 2008

The logo he created for the Dead Kennedys, a San Francisco band that for many defined the in-your-face, politically liberal posture of 1980s American punk rock.

The Money Tree, 1983
A slightly different version of this illustration was used on the April/ May 2000 cover of the New Yorker and Spin Magazine 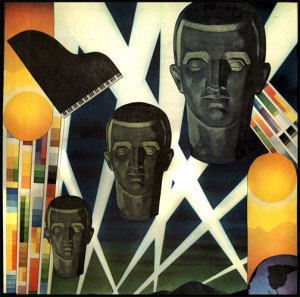 When the Lights go on Again all Over the World, 2008 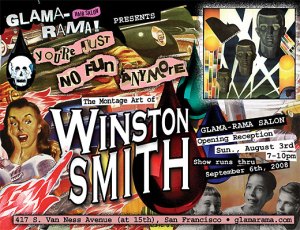